An article reported by Nguyen Minh Chau - our Project Intern at the Hanoi office of the Rosa-Luxemburg-Stiftung. 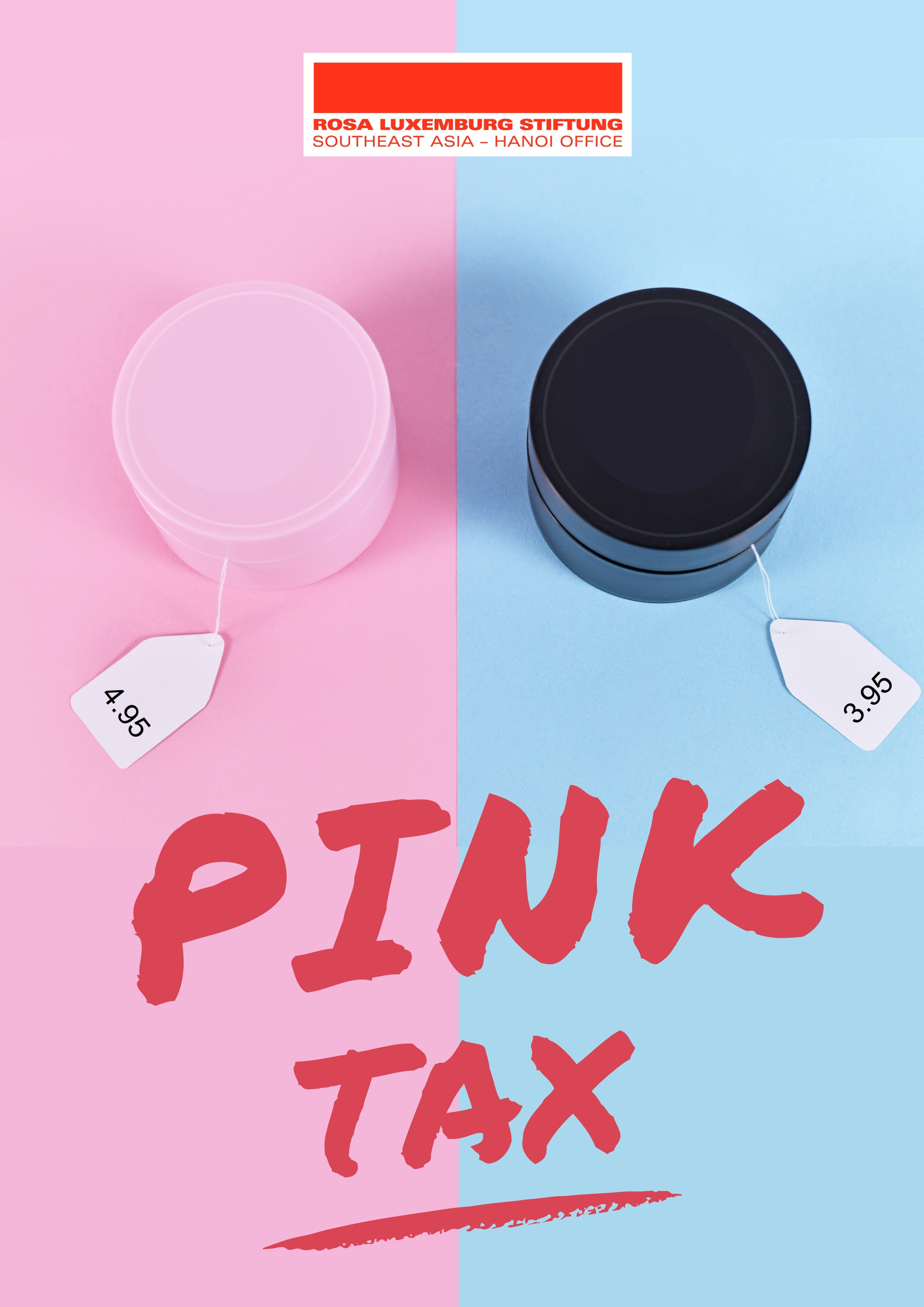 When you go to a supermarket to buy shampoo or shop online for new summer clothes, do you ever look at the price of the same product when it is marketed toward women and men? Are you aware that women are often charged more for goods and services? This is a common occurrence. And it has a name – the ‘Pink Tax’. The word ‘tax’ here mostly refers to the pricing method that brands implement. But, in certain cases, it also refers to the unfair taxing of women’s products, as in the case of menstrual items. Combined with ‘pink’, a color often associated with women, the tax emphasizes the absurd costs that women are forced to pay.

THE PINK TAX MAY BE MORE COMMON THAN YOU THINK

The Pink Tax, as a term, originated around 2014. It then became popular in France and the US when activists and the media began highlighting the existence of gender-based pricing. However, the phenomenon itself has been around for years, since the US drafted its sales tax system with legislators determining which items would be tax-exempt. According to a 1994 report from California's Assembly Office of Research, almost two-thirds (64%) of stores in five major cities in the state charged more for laundry and dry cleaning for women's blouses than for men’s button-down shirts.[1] It also found that women paid $1,351 more than men each year on goods and services. After this study was published, California passed the Statewide Gender Tax Repeal Act of 1995, stating that “no business establishment may discriminate, concerning the price charged for services of a similar or like kind, because of the person’s gender”.[2]

In the US, the fast-food chain Burger King has even made a joke about the Pink Tax. In July 2018, it sold its chicken-strip fries to women in a pink box for $1.40 more and renamed them, Chick Fries. If you find this ridiculous, that is exactly what Burger King was trying to highlight.

The ‘Tampon Tax’ is a prominent element of the Pink Tax that has garnered much discussion. In 35 US states, buyers of feminine hygiene products have to pay heavy sales and value-added taxes. Meanwhile, many male-specific products like condoms and even Viagra are considered essential health supplies. As such, they are tax-exempt. It is reported that the average woman spends $6,360 on period items over her reproductive lifetime. Evidently, a woman’s wellbeing is overlooked when products like tampons and pads, indispensable for natural bodily function, are taxed as luxury goods.

In Vietnam, there is hardly any research on the existence and impact of the Pink Tax on women. But that doesn’t mean we can’t see it with our own eyes. Take the case of Bui Thi Xuan High School[3] in Ho Chi Minh City as an example. Female students are required to have four uniforms including Ao Dai, skirts and button-ups, and pants and button-ups to wear on specific days of the week. This increases the cost of female uniforms. Meanwhile, the only uniform requirement for male students is pants and button-ups. Aside from the unfairness of asking girls to put a lot more effort into their appearance, their parents are also forced to pay extra for their daughters, and these expenses aren’t even necessary.

THE PINK TAX IS UNETHICAL

As corporations search for new ways to make greater profits, product differentiation becomes a convenient excuse for price increases. Sometimes, the justification for a higher price tag is only a mere change in color - $7.51 for a pack of pink razors instead of $4.99 for the same ones in green. Together with other clever marketing strategies that convince customers they “need” all variations of this more expensive, slightly different product, it promotes rigorous consumerism. In other words, we are actually encouraged to buy more products at a higher cost. Brands, in turn, pocket more money.

The fight against the gender pay gap is nothing new - it has been going on for decades. And though progress has been made, there is still a painstakingly long way to go, as women worldwide still earn 23% less than men.[4] Therefore, there is an inherent contradiction in the Pink Tax: why is the markup put on women’s products when they generally have lower disposable income than men? The answer is inconclusive. But the reality is that this definitely puts even more strain on women. Being paid less yet charged more won’t help to bridge the gender wealth gap.

Unfortunately, there is little insight into the subject of the Pink Tax in Vietnam. Clearly, this is still a new and unknown concept to many of us. Of the few articles available, the existence of the Pink Tax is exhibited in examples drawn from western countries, which don’t necessarily apply to ours. When it comes to tax exemption, sanitary pads and tampons are not on the list, but neither are condoms. No in-depth reports on the price difference of consumer goods according to gender could be found online. However, quick price comparisons show that the gap may not be as large as in other countries. For instance, two T-shirts of identical design, one sold in the men’s section and the other in the women’s by retailer Viet Brothers have identical pricing. In a way, it is understandable that the Pink Tax is not the most pressing matter for Vietnamese. At the same time, however, no one can confidently claim that we are free from gender-based discrimination in consumerism when there is still a gender pay gap of 29.5% between Vietnamese men and women.[5]

Needless to say, there should be more research and more awareness raised. Companies rely on their customers remaining in the dark to carry out such practices. So, if the Pink Tax isn’t yet a big issue, our current lack of understanding can be a good starting point for further exploitation.